It began with a bowl of beautiful reddish-gold plums and a question: are those damsons?

The young woman behind the bar at one of my favorite places in the world, The Old Parsonage Hotel in Oxford, England, shrugged her shoulders and said she didn’t know.

Why did I want to know about damsons? In my Anglophilic way, I’d read about them, probably in a Miss Marple mystery where her fondness for damson gin is mentioned. Damsons seemed as romantic and mysterious to me as greengages, another kind of plum I’ve often come across in English books and never been able to find in the United States.

Fortunately for me, the manager of the restaurant, a young Polish man, overheard my question and explained to me that damsons are smaller dark purple plums. Then he disappeared into the restaurant kitchen and came back with a plate of toast and a small white dish of damson preserves for me to try.

The color, the deepest of plums, and the taste—dark and dusky, blackberry-like with a tart edge, with chewy bits of caramelized plum skin instead of seeds—captivated me. I was thrilled to finally have this longstanding English mystery solved. Later that morning, the manager told us he’d given orders for us to be served the damson jam at breakfast the next morning, and I was completely charmed.

It was a beautiful September day, and my husband and I laughed and went on with our plans: a picnic at the Oxford Botanic Garden. That night, our daughter called with devastating news: Jennifer, one of my oldest and dearest friends had died suddenly, and her memorial service would be held while I was still in England.

Jennifer and I had met in our high school geometry class (she was definitely better at geometry than I was) and we’d gone on to be college roommates and maids of honor in each other’s weddings. I’d had a long, catch-up lunch with her just a few weeks earlier.

I didn’t know what to do. My sister Susan was coming so we could spend a week in London together, so I couldn’t go home. Thinking about Jennifer as I spread damson jam on my toast the next morning, I remembered her favorite flowers, yellow roses. I went to the Covered Market in Oxford and bought two long-stemmed yellow roses. Several years earlier, I’d spent a week at Christ Church College during their summer program, and found a sense of deep peace at the chapel of St. Frideswide inside Christ Church Cathedral. Now it was the only place I could think of to go with my grief.

I kept one of the yellow roses with me in my bag for the rest of the trip. I placed the other one on the medieval shrine of St. Frideswide, lit a candle, and sat there reading and praying for a long time. It was 2014, Jennifer was only 56 years old, and I couldn’t imagine my world without her, and our long lunches and afternoon teas talking about everything under the sun.

The day my husband left for home, the kind Polish hotel manager surprised me with a vacuum-packed package of damson jam to take home. I was delighted and took it to London with me, guarding it like a precious treasure. Fortunately, Jennifer’s memorial service was livestreamed, so I was able to watch it in my hotel room in London. But it was not the same as being there and I still felt a huge sense of loss. 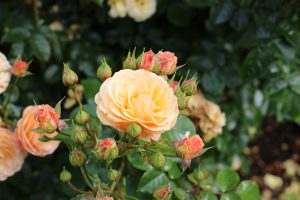 My sister arrived and we had a wonderful week together, haunted by yellow roses. There were yellow roses at the Chelsea Physic Gardens, and in the arrangement on the table of the foofy London hotel where we enjoyed a decadent afternoon tea. I saw them everywhere, and each time, I experienced them as manifestations of Jennifer’s spirit.

I hugged the delight of the gift of damson jam to myself for comfort, envisioning cozy mornings at home with jam-covered toast and a mug of tea. And eventually, I packed my precious jam in my carry-on bag and went to Heathrow.

Perhaps you will have seen this coming, but I didn’t. Never had I ever dreamed that my lovely damson jam could be considered a liquid. But Her Majesty’s customs officers disagreed—and confiscated it! Their search of my bag was so thorough I almost missed my flight.

After I got home, I planted a yellow ‘Graham Thomas’ rose in my garden in Jennifer’s memory and it bloomed the next year for the first time on her birthday, June 7. Again, I was grateful and felt her spirit with me. Also, that spring, determined to recreate my lost jam, I planted a damson plum tree in my garden.

Six years passed (I mean, SIX years!) and the tree did nothing. Oh, it grew and occasionally produced a few flowers, but there were no plums. Early in the lockdown spring of 2020, I had a serious talk with the tree. I told it that if it did not produce, it was out. This was not a charity gig, it was taking up precious garden space, and if there were no plums this year, the compost pile would be its next destination.

By April, the tree was covered in white blossoms, and that summer we had an amazing crop of damsons. In that miserable year, when we most needed a miracle—we got one. A previously barren plum tree bloomed and produced fruit, and in a Barbara Pym-like way, that small miracle gave us hope for better days. Proof again of the life-giving sustenance I’ve always believed can be found in the small things.

This year, 2021, we had a long, very hot summer in the Pacific Northwest, but the damson tree produced another stellar crop and Jennifer’s yellow rose bloomed all summer long.

Have you ever wanted to send a message to someone but couldn’t find the right words? In my next post, we’ll explore the Victorian Language of Flowers. In the meantime, I’d love to hear about the small miracles that helped sustain you during the pandemic!