I’M STILL PROCESSING ALL we saw and did on our trip to France in September, and today I’m thinking about the day we spent at Giverny, Impressionist painter Claude Monet’s famous garden.

I’ve always been obsessed with seeing the beauty in everyday things, and in Monet’s work, I find that focus on beauty in the everyday lifted to a whole new level. After some financially lean years in Paris when his art was not appreciated, Monet moved with his family to the tiny Normandy farming village of Giverny in 1883. He leased the house till he was finally able to buy it in 1890, and three years later, he bought an adjacent plot of land and created his water garden. The water garden, together with the Clos Normand, the wildly colorful flower garden surrounding the house, created a landscape that fed his soul and his art till the end of his life. “I work at my garden all the time and with love,” he wrote. “What I need most are flowers, always. My heart is forever in Giverny.” 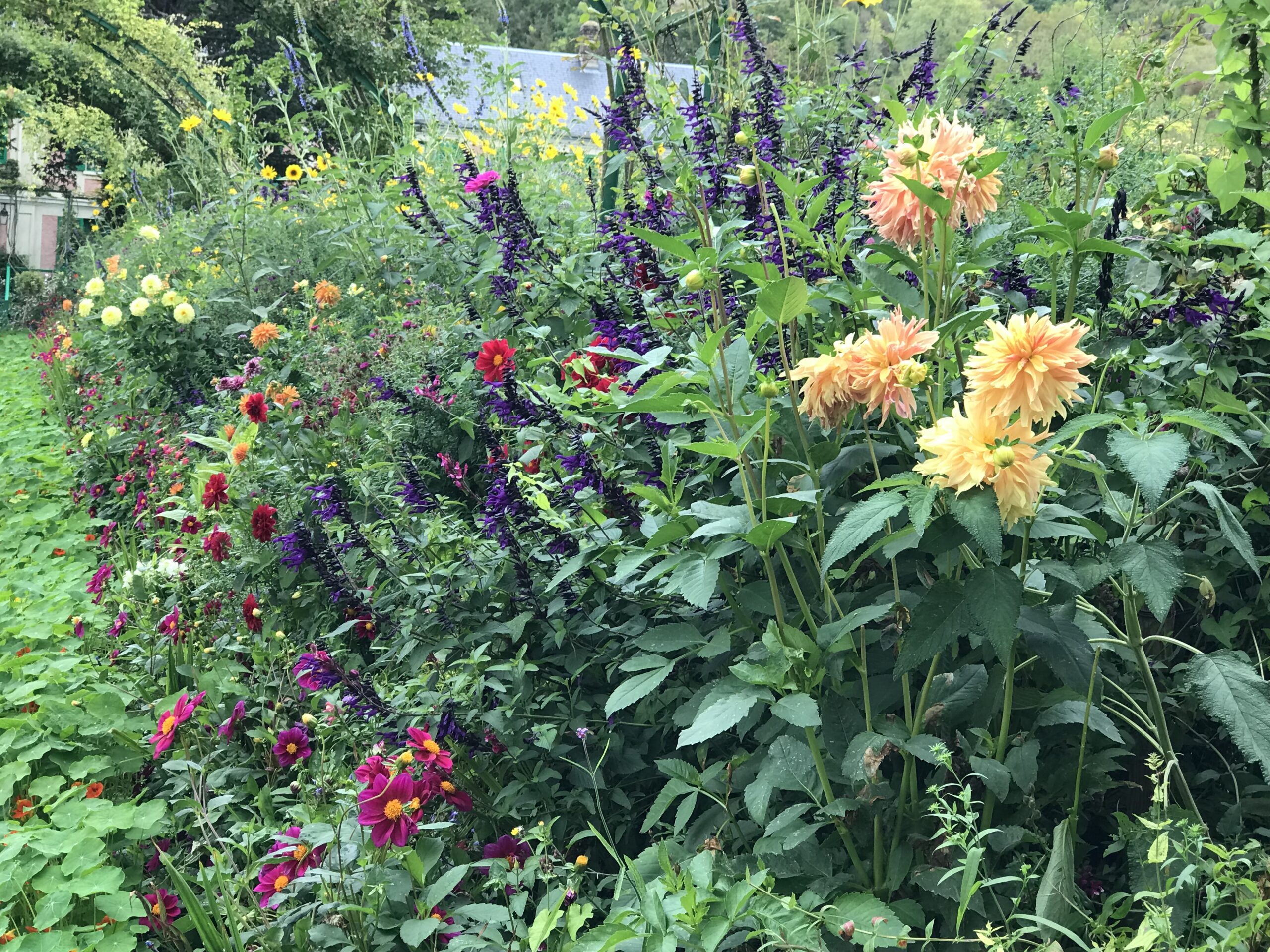 But creating such beauty did not come without suffering. Monet endured the death of his first wife, Camille, and the deaths of his stepdaughter Suzanne, and his second wife, Alice. His son Jean died after WWI. He went through crippling periods of depression after these losses and especially one year when the garden flooded, killing all the water lilies. His moods were completely dependent on the weather, which made him difficult to live with at times. “Monet is most desperate, for the violent wind . . . is breaking all the flowers and prevents him from working; he is most upset (and bad tempered),” Alice wrote to her daughter Germaine in June 1906.

Though he had promised his dealer, Paul Durand-Ruel, enough paintings for a second water lily exhibition in May 1907, his frustration with his own abilities tormented him. In April 1907, he canceled the show after destroying thirty(!) canvases. “I am finding it harder and harder to satisfy myself, and this breaks my heart at times.”

As if all this weren’t enough, as he grew older, Monet had problems with his eyesight. Cataracts caused his vision to deteriorate to the point where he needed surgery; instead of helping, it produced its own agony. For a while he saw everything tinged with yellow, then with blue. Tinted glasses helped, but didn’t totally solve his color perception issues. World War I swept across France; at one point, he could hear the guns in Amiens, only thirty miles from Giverny.

Through it all, he kept painting.

The whole time we were floating on the Seine, I felt like I was living in a Monet painting. 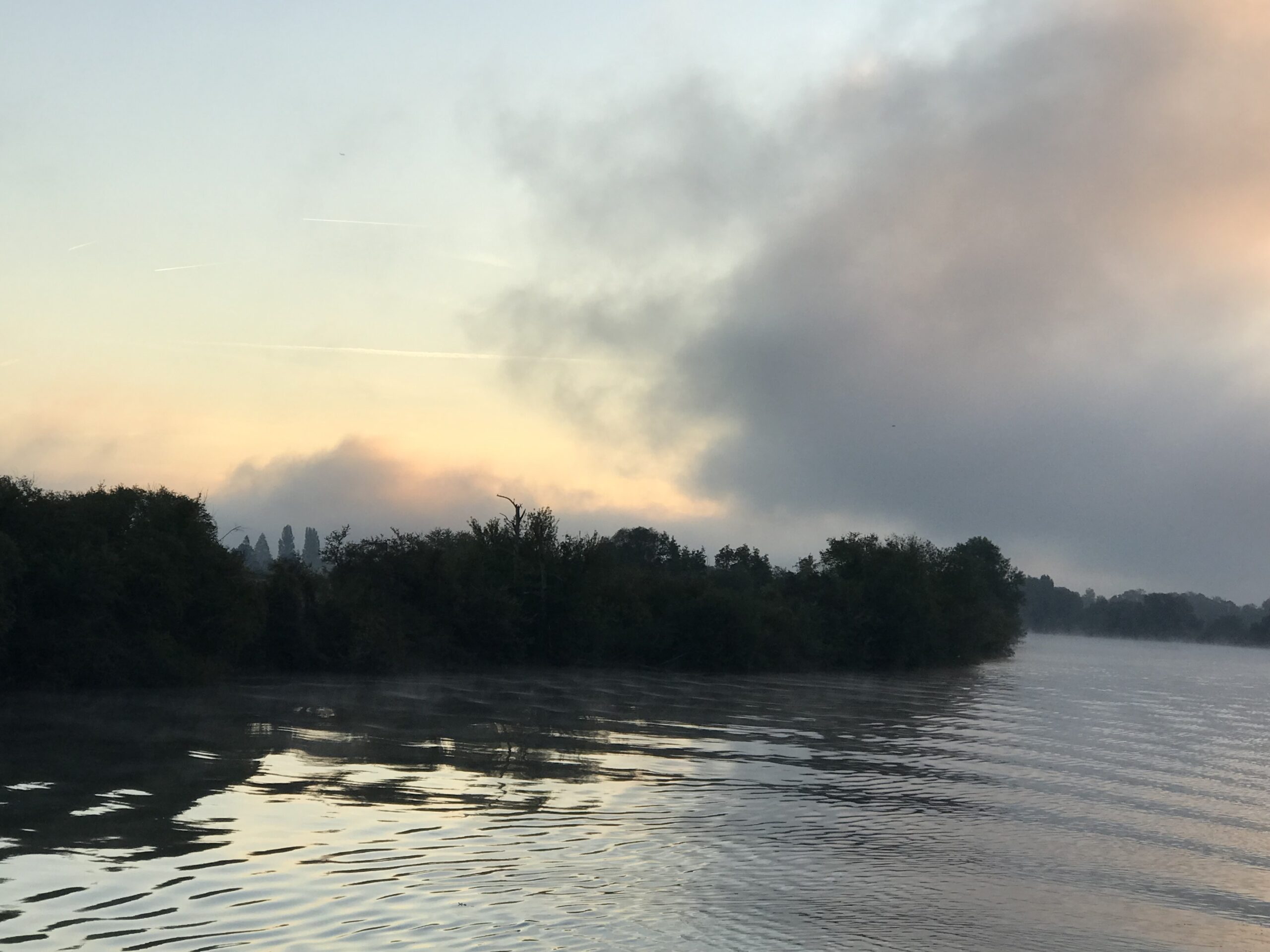 With Monet’s extraordinary inner vision, he translated mundane scenes of things we see every day—trees, water, flowers, skies, haystacks—to something so far beyond the everyday that millions of people make the journey to Giverny every year, wanting to see what Monet saw.

Because of its popularity, my actual experience of visiting the garden was not the meditative one I’d long dreamed of. Essentially, you’re put on a path and you have to keep moving, all the way around the water lily pond (bigger than I expected) and across the famous Japanese bridge, still so brilliantly lovely and perfect in that landscape. Then it’s on to the Paintbox Gardens and the Clos Normand, a fabulously wild tangle of flowers as unrestrained as any English cottage garden. You end up at the iconic pink house with the green painted shutters, which you can go into and which still feels amazingly like a place where a real family might have lived.

Then it’s on to the gift shop and you’re out into the village, which is so tiny I was shocked to see a car coming toward me on what I thought was a wide pathway—it turned out to be the village’s main street! I’d taken my watercolors with me, hoping for a few moments to sit and reflect, and maybe paint just one flower in Monet’s garden; sadly, it didn’t happen.

And yet. And yet.

The garden, so beautiful on that soft September day, haunts me. Maybe it has to do with the singularity of Monet’s vision, creating that landscape over years of time, despite the heartbreaks of life and even a war in his own country—and then painting it. 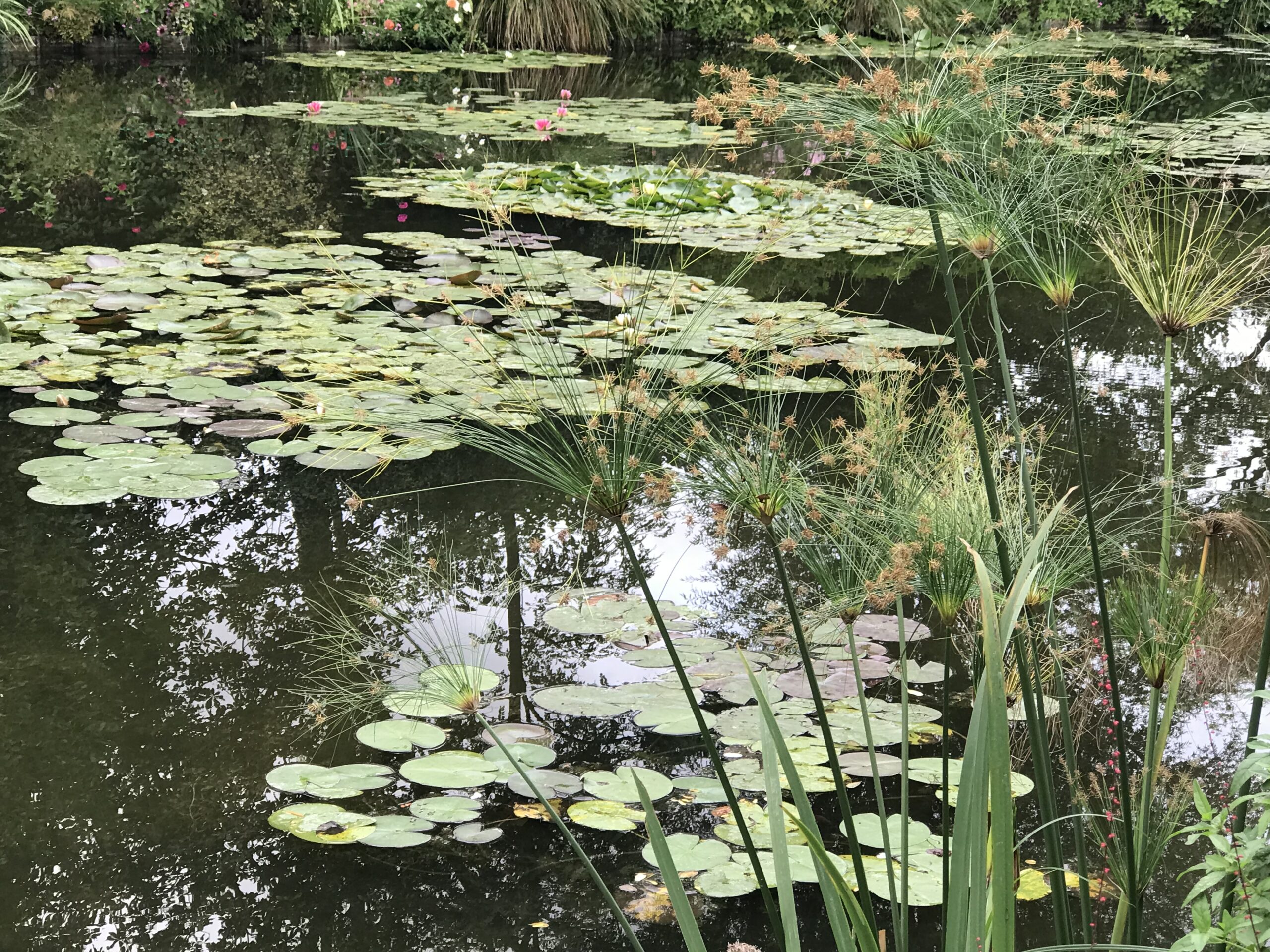 “The light constantly changes, and that alters the atmosphere and beauty of things every minute,” he wrote.

In our world where people are obsessed with tiny screens they carry with them everywhere, this man spent his life looking—and translating the “everyday” beauty he saw around him onto canvas, so that even almost a hundred years after his death, we can still see it.

Here’s the question I’m left with: what beautiful things am I (or we) not producing because of our addiction to the daily distractions of our screens?

The light constantly changes, and that alters the atmosphere and beauty of things every minute.

Just think about that: every minute . . .

I’m so grateful to Claude Monet for devoting his life to catching those fleeting alterations of light—and beauty—and leaving them for us to enjoy in his paintings.

All other photos my own