IT’S JANUARY, AND if there’s a better month for snuggling inside with a good book and a cup of tea, I don’t know what it is!

I’ve recently been inspired to think about my favorite books of last year in terms of Oscar award categories by the fabulous Elsie @ Tea and Ink Society (check out her post here). I’m going to take Elsie’s wonderful idea and jump off from it with some of her categories—and a few of my own as well!

So, first up: Best Heroine.

It’s 1862 in Regency-era London, and like most women of her class, Julia is expected to run the gamut of balls and parties looking for a suitable husband. But though she is highly motivated to get away from her truly terrible, narcissistic parents, Julia is crippled by intense social anxiety (which, of course, wasn’t understood in her time). Her only respite is riding her big black horse, Cossack, in London’s Rotten Row with her friends.

Even though I’m a lifelong romantic and I love books with historical settings, I have to confess that I resisted reading Regency romances for YEARS—mostly due to the embarrassingly schlocky cover art, but also (OK, I’m going to sound like a snob here) because of the feeling that somehow, they weren’t “worth my time.” I’m delighted to say that I couldn’t have been more wrong! I wouldn’t have survived the pandemic without Georgette Heyer’s classic Regency romances, and reading them led me on to the many excellent contemporary writers in the genre.

What I didn’t realize before is that Regency romance is truly a woman’s genre. Though Jane Austen memorably captures the vulnerability of women who need to marry well like the Bennet sisters and especially Charlotte Lucas, I think it can still be hard for women in the modern era to fully grasp how limited their choices were. Julia Wychwood really brought that home for me.

Even though she’s a wealthy heiress, her parents control absolutely every aspect of her life: what she does, who she sees, even who is allowed to court her. Her money does her no practical good at all—it only serves to make her more attractive to dissipated, aristocratic fortune-hunters. When Julia feigns illness to avoid social engagements, her parents summon a physician to “bleed” her, which leaves her weaker than before, until she’s literally on the verge of death.

That’s when she realizes that “the world wasn’t a kind place for young ladies who were shy and vulnerable. . . . Julia had always believed she was safest at home. But she wasn’t. Perhaps she’d never been.”

And so, she takes matters into her own hands—by proposing marriage to a man she’s attracted to but barely knows. But under her conditions. I’ll leave you to discover the rest of this delightful story for yourself. 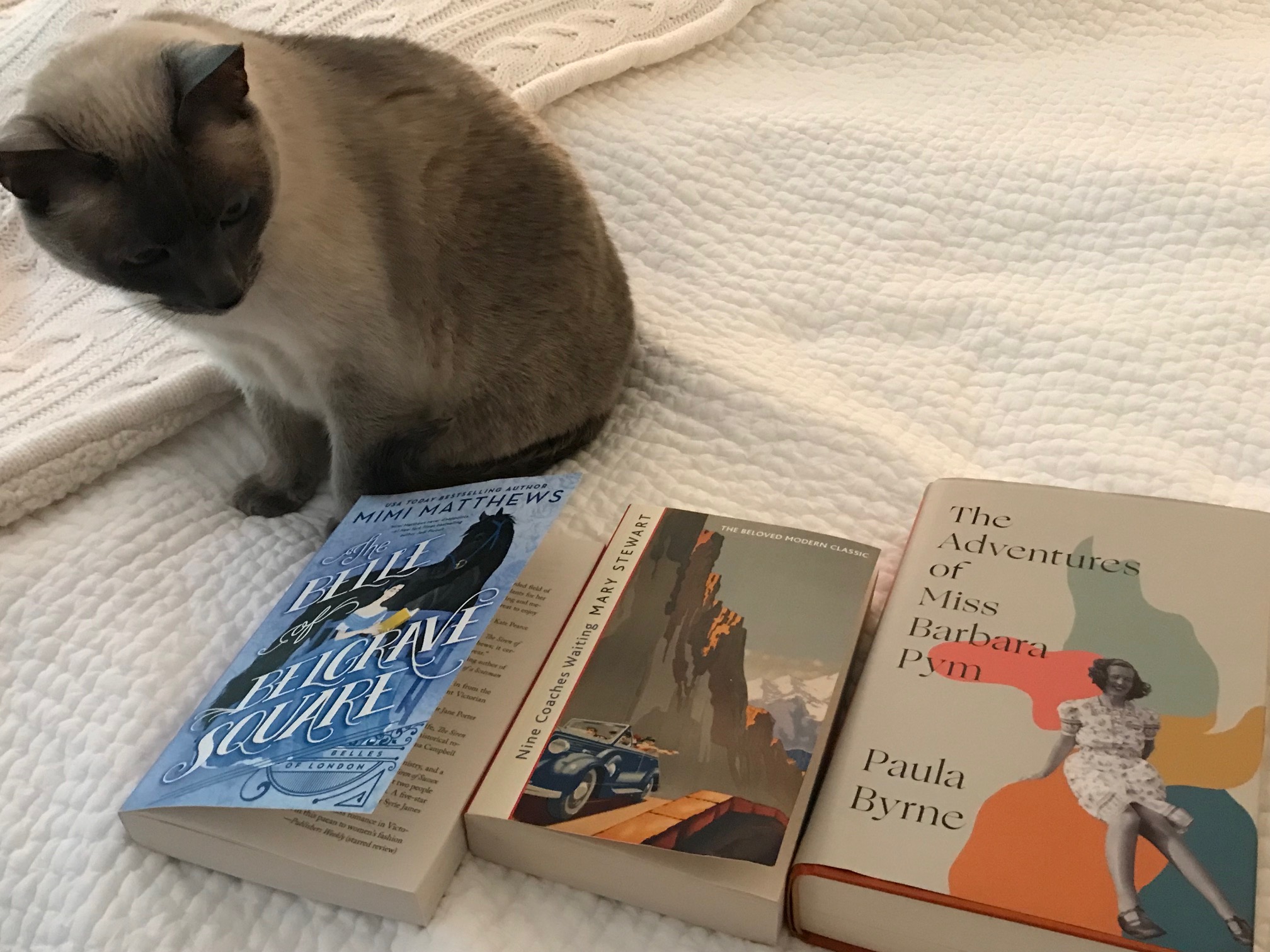 Zoe, posing with my Oscar choices

I reread Nine Coaches Waiting by Mary Stewart with a group of fellow (sister?) Mary Stewart fans I met on Bookstagram last year, and enjoyed it so much. Perhaps because I’d just been in France in September, I was even more captivated than usual by Stewart’s wonderful descriptions. More than almost anyone I’ve ever read, she has the ability to capture the essence of place in a way that not only keeps the reader situated and moving through the story, but is also beautifully written.

Like this: “The Valmy road was a zigzag, a steep, rather terrifying approach which the big car took in a series of smooth upward rushes . . . swooping up through woodland, then open hillside, and running at last under the high boundary wall that marked the end of the chateau’s formal garden.”

And this: “The air was very still. Below me, in the valley-depths where the river ran, I could see, quite distinctly now, the pale drift of mist. The owl cried again once, very sadly, from the wood. There was a strong wet smell of earth and growing things; the smell of spring . . . not softness, not balm-and-blossoms, but something harsh and sharp that pierced the senses as the thrust of new life broke the ground.”

Writing about Nine Coaches inspired me to invent a new Oscar category!

I’ve written before about how much I love details of food in novels. As a reader, I find it so satisfying to know exactly what the characters are eating. So, for your vicarious dining pleasure, also from Nine Coaches Waiting, this delectable feast:

“My betrothal supper, held between firelight and moonlight . . . I remember thin curls of brown bread with cool, butter-dripping asparagus; scallop-shells filled with some delicious concoction of creamed crab; crisp pastries bulging with mushroom and chicken and lobster; petits fours bland with almonds; small glasses misty with frost and full of some creamy stuff tangy with strawberries and wine; peaches furry and glowing in a nest of glossy leaves; grapes frosted with sugar that sparkled in the firelight like a crust of diamonds . . .”

After all, miss, this is France! Mmm, I’m drooling as I write.

I’m so addicted to stories that I have to confess I’m not a great reader of non-fiction. But I’m always up for a new biography of one of my favorite writers, and in 2022, that was The Adventures of Miss Barbara Pym by Paula Byrne. I’ve written about my love of Pym’s novels, especially Some Tame Gazelle, and this was a deep dive into the life and times of a very complicated woman.

Barbara Pym was one of the first women to attend Oxford University in the 1930s. One trait I’ve always found endearing in Pym is her interest in clothes; in diary entries, she often describes what she or others are wearing (even down to the underwear!), and her books feature clothing details as well.

Pym loved men, and she loved falling in love, but she never married. She had a great gift for enduring friendships—even at the end of her life, she was still friends with Henry Harvey, the self-obsessed Oxford undergrad who’d broken her heart by marrying another woman. She visited Germany in the late 1930s and then endured WWII on the Home Front in England. As a single working woman, she experienced what she called “spinster” life in Britain during the bleak postwar years. What impresses me most about Barbara Pym is that through it all, she wrote. It was her way of moving through the world, and even when the publishing world was hostile towards her, she never gave it up.

“Once outside the magic circle,” she wrote in Jane and Prudence, “writers became their lonely selves, pondering on poems, observing their fellow men ruthlessly, putting people they knew into novels.”

I haven’t gotten to half my categories yet, so stay tuned for future installments! Since I’m hard at work on my new novel, I’ve decided to blog only once a month (instead of twice). So, look for future posts around the middle of each month, with maybe an occasional bonus one thrown in here and there.

Thank you for reading, my friends, and happy new year!

Photo of cat and books: my own