The Long Path to THE WALLED GARDEN

I  HAVE A CONFESSION to make: this is not the post I planned to write today!

It breaks all my self-imposed rules for this blog: being overly self-revelatory, expressing less than positive feelings, and blowing (way) past my word count. It began as a guest post for another blog, took on a life of its own, spun out of my control, and became what you’re reading now. But since it’s just a week till my debut novel, The Walled Garden, comes out, it seems right to share with you my long journey to this moment, so if you’re willing to bear with me, I’d be so appreciative, and if not, I’ll understand.

I have been in love with words and books all my life. A few early memories:

As a first-grader falling in love with reading, I came to a word I didn’t know and asked my teacher. She wouldn’t tell me because she said she didn’t want me to read ahead. I went straight home and asked my mother. You’d think I’d have guessed from the picture, but the word was “airplane.”

In fifth grade, my teacher chose the first stanza of a poem I wrote about autumn (which I can remember thinking wasn’t really very good) and put it on the cover of the class collection of fall poems: “Pumpkins, orange as the moon / Red leaves falling / Is fall here so soon?”

As a moody teenager, I shut myself in my room and wrote stories. Mystery, danger, romance—I was on it! Most of them featured a shy, dark-haired girl who was suddenly revealed, through extraordinary (if highly improbable) circumstances, to be so much more than everyone at school had previously thought. I also took journalism classes, co-edited my junior high and high school newspapers, and wrote for my college newspaper.

I was always reading. Growing up, I got in trouble from my mother for “reading too much.” (I still don’t know what that means.) Even as an English lit major in college, when my job, so to speak, was reading, I continued to read for pleasure. Reading was my lifeline, my sustenance, my consolation. I read to understand myself and other people, to find my place in the world, to try and figure out things I didn’t understand. (There were so many things I didn’t understand.)

Along the way, I found that certain books spoke to me more than others. I read and reread. I started to try and analyze how certain books made me feel. Everyone (my parents, aunts and uncles, all the “grownups” I knew) asked me what I was going to do with an English major.

All I knew was how much I wanted to find a way to give others the same pleasure that books had always given me. But for a long time, I didn’t have the courage to admit that to anyone, including myself. I did not come from a literary family; my roots are very working class—the primary question was: how was I going to make money?

Fortunately, I could type. Really fast.

That alone tells you how long ago this was.

Also—fortunately—I was in love! He was an accounting/business major (all the practical things I’m not). The “grownups” in my life sighed with relief. At least I wouldn’t starve.

So, we got married. But I still loved words and I still wanted to write. And let me just say here that my husband is a wonderful man who has loyally and truly supported me and my desire to write—always.

I tried to write in the corporate world. It never worked out. (Besides, it was boring.) In my spare time, I wrote a mystery novel called Murder to a Tea. About the time I started to get some traction with it, I got pregnant. Then, less than two years later, I was pregnant again.

I even pursued my longtime interest in watercolors and eventually became a painter, thinking that if I couldn’t write, surely painting would satisfy my need to be creative.

When my kids were still young, I’d had a dream about a young American woman, an old English gentleman, and a young British guy, and I started writing about them, trying to figure out who they were. I wrote about them off and on for years, till my kids finally went to college, and I decided that if I was going to take myself seriously as a writer, it was now or never.

So, I took my half-assed beginning of a novel with my three characters, Lucy, Sir Edmund, and Sam, and I started going to writers’ conferences. Eventually, I got an MFA, but the novel still wasn’t finished. I hired a writing coach and kept writing. I grew flowers. There were cats. And tea. Lots of tea. And words, always words. Handwritten, typed, deleted, torn up. There were books and more books. Love and loss—lots of loss. Two dear friends, much too soon. Then, one year, three of our elderly parents left this world within four months. There were moments of joy. And despair. Even broken bones: my right wrist. (Yes, I’m right-handed.) I went through all the therapies: physical, mental, gardening, chocolate. Lots of Prosecco, when there was some small thing to celebrate and even when there wasn’t. And so, another ten years of revisions and rejections went by.

Till we hit the beginning of the pandemic in 2020. By then, I’d spent three years querying agents, gotten some painfully near-miss rejections and many “doesn’t suit our needs at this time, but please do keep us in mind with any future work” rejections. I’d revised the manuscript as many times as I could stand.

And I was just . . . done. I announced dramatically to my family that Lucy was dead. After fifteen years of work on the novel, I was ready to give it all up.

With no real hope, I decided to try one last thing. I queried a hybrid press called SparkPress, and they accepted me.

And so, though Lucy had been on life-support, she was not dead! Last weekend, I experienced the thrill of seeing her, aka The Walled Garden, on the fiction shelf at the Barnes & Noble where I will be signing copies in a few weeks. 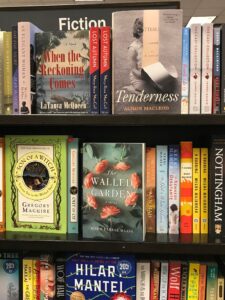 So, here’s what I want to say: whatever you’re working on, whatever it is you dream of doing, DON’T GIVE UP. Nobody said it was easy, as the refrain from my favorite Coldplay song reminds me. You know the next line: No one ever said it would be this hard.

The book sustained me while I was writing it in the same way that I hope it sustains you while you’re reading it. And whatever that beautiful, difficult thing you’re trying to do is, please, please, don’t give up. Keep going, and give us your gift! We need it.

Book image: my own