I’M FINDING IT REALLY DIFFICULT to gather my thoughts about England, a place I’ve been in love with since I saw Mary Poppins when I was six years old. During the pandemic, when I was feeling nostalgic for all the trips I wasn’t taking, I tried to find the journal from my very first trip to England in 1980. It’s got to be in a box somewhere in the attic but I haven’t unearthed yet; perhaps that will be the subject of a future post!

England is on my mind because I’m finally beginning to believe that the European vacation we so blithely booked in the fall of 2019 for June 2020 (yes, you know that story) is actually going to happen a little more than a month from now.

Gertrude Stein famously said, “America is my country, but Paris is my home town.” If you substitute London for Paris, I feel absolutely the same. In Richard III, Shakespeare memorably describes England as “this blessed plot, this earth, this realm, this England” and I feel the timelessness of that description every time I go back.

The fact that I am going back to England again bemuses some people, I think. Why go back to a place I’ve already been multiple times when there are so many other places I haven’t visited yet? The closest answer I can come up with is because London feels like home to me. When I’m completely spent from the stress of pulling out of my life at home and getting on a plane, being in England grounds me again. It gives me energy and joy and the feeling that I know how to travel and I can do this.

More importantly, I meet myself at different ages there—the freshly-minted college graduate wishing she could have studied amongst the ancient stones of Oxford; the newly-married woman thrilled to be in England with her husband; the young mother dragging her kids to every castle she can find; the middle-aged woman traveling alone, or with friends, or with my husband or my sister, coming back again to experience all the joys of England that so deeply comfort my soul.

Joys that include being able to get a good, HOT cup of tea anywhere—in any shop, any garden, any castle or stately home café—always accompanied by a small pitcher of milk. (Though I have had a few truly terrible cups of tea in England too—most memorably in the café at Magdalen College, C.S. Lewis’ college in Oxford, where it was sadly dispensed from a machine, bitter and completely undrinkable.) 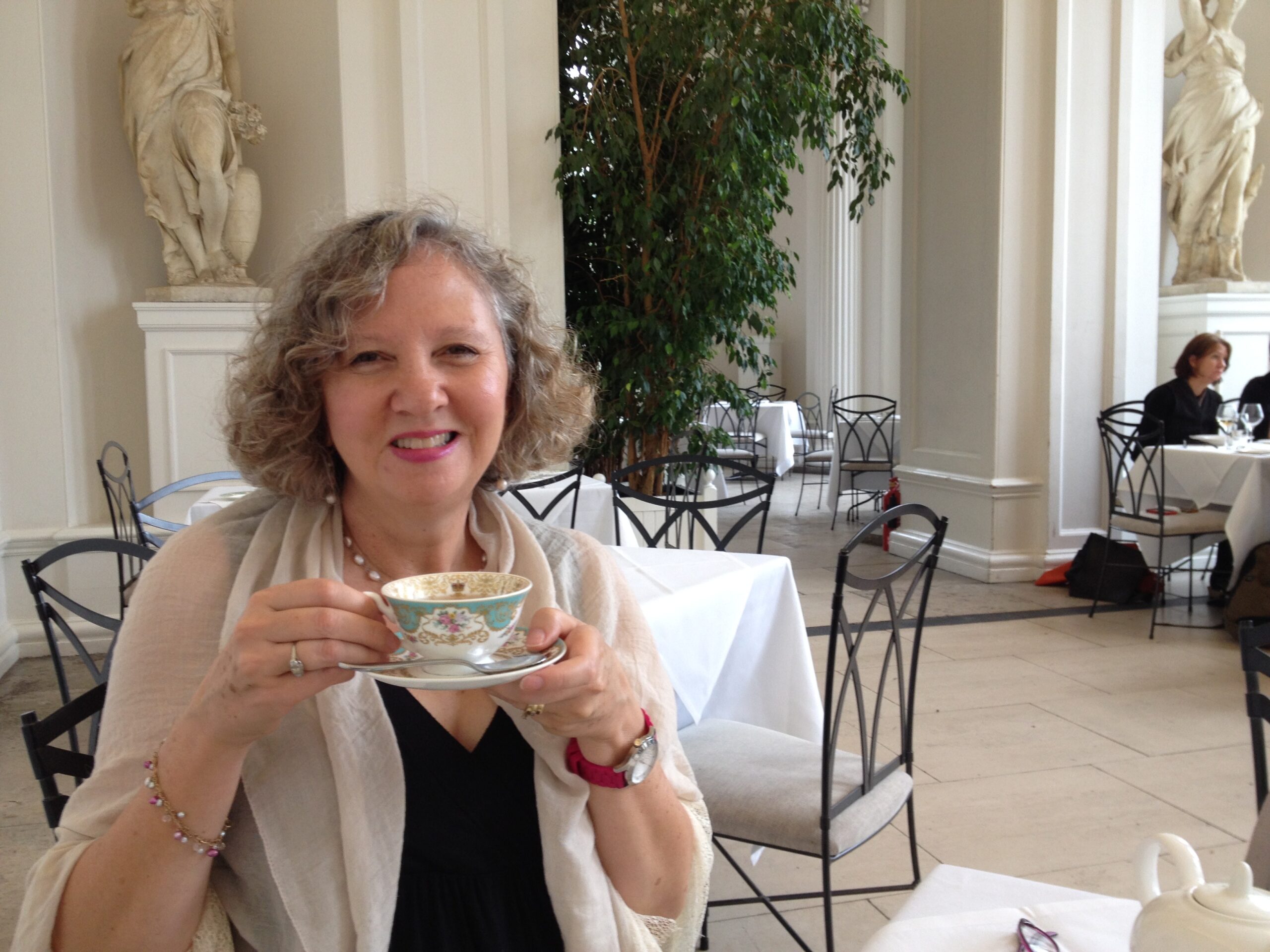 One of the many wonderful English cups of tea I’ve enjoyed, here at one of my favorite places in London, the Orangerie in Kensington Gardens in 2014

To someone who grew up in a somewhat chaotic household in a small and charmless town in western Washington where there was scarcely a building that had been built before the 1940s, there is something so appealing about the order and comfort of English life. The fact that there are homes—not even necessarily grand or stately homes—just domestic dwellings, that have been continuously inhabited since the 1600s or even earlier never fails to blow my mind.

Perhaps most importantly for me, the England I’ve dreamed of from books is still recognizably there, even, in some cases, after centuries. Starry-eyed about Arthurian legends on that very first trip, I went to Tintagel on the wild, rocky Cornish coast, where tradition holds that Uther Pendragon’s encounter with the beautiful Queen Igraine ultimately led to the birth of the once and future king.

And the London I fell in love with in Mary Poppins, where families lived in orderly rows of white stone townhouses with glossy black iron railings and grassy, expansive parks nearby is still there too; as is the England of Agatha Christie, easily discerned in the streets of London and the modest manor houses and gardens of country villages. One of my greatest literary thrills from those early trips was figuring out the exact spot in Oxford where Harriet Vane finally accepts Lord Peter Wimsey’s proposal of marriage in Gaudy Night, after three books’ worth of soul-searching and hesitation.

After all these literary musings, I have to confess that there’s actually a practical reason we’re going to London. As well as reacquainting ourselves with our favorite city, we’re using the week there to acclimate to the eight-hour time difference before we embark on a river cruise on the Seine from Paris through Normandy.

I’m thinking of a scene from one of my favorite movies now, the 1995 version of Sabrina. After Harrison Ford seems to have betrayed Julia Ormond’s trust, he asks her how she’s getting home. She holds up the plane ticket to Paris he’s just given her, and says, “I’m flying home.”

After five long years, so am I.

All photos my own